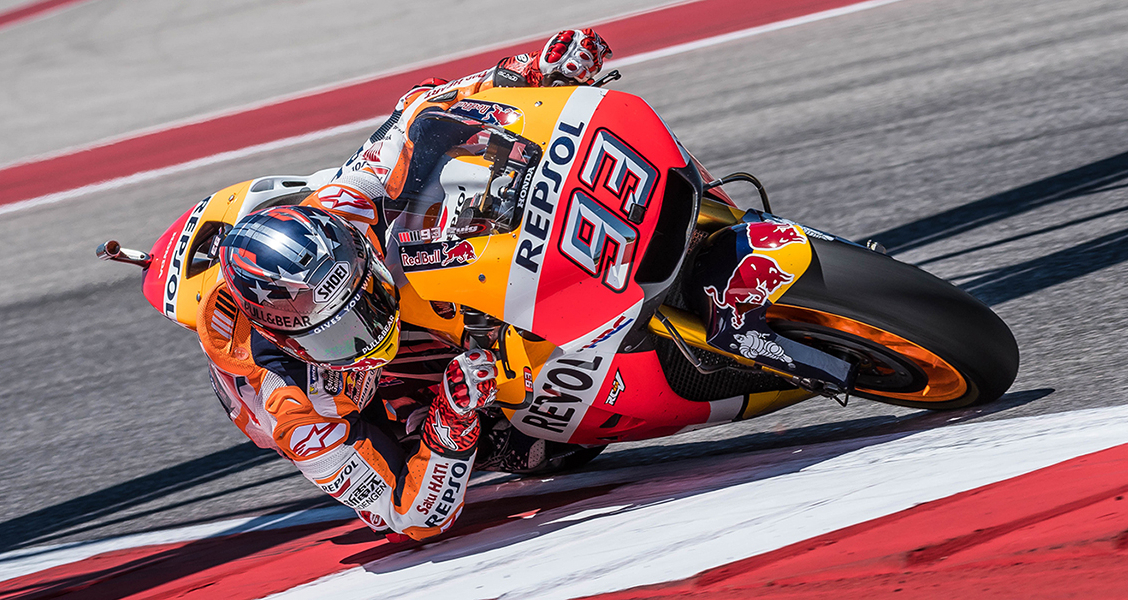 The only MotoGP™ race weekend to take place on U.S. soil in 2018 returns to Circuit of The Americas for its sixth successive year this coming April 20-22, with tickets going on sale from today!

The MotoGP Red Bull Grand Prix of The Americas is now fully established as one of the most thrilling race experiences of the year. Austin’s long-standing motorcycle heritage allied with COTA’s cutting edge racing facility ensures that audiences can expect a jam-packed weekend of world class two-wheeled excitement on-track alongside an incredible schedule of off-track entertainment to keep fans of all ages thoroughly engaged throughout this action packed stage of one of the world’s most popular racing series.

In addition, in 2018 - in celebration of ALL motorcycle riders - COTA will be combining all cycle corrals into one, giving visitors a true sense of the racing community.

Last year’s MotoGP Red Bull Grand Prix of The Americas produced another stunning race weekend which saw Marc Marquez cement his position as the King of COTA with his 5th successive win in Austin. This was also the first victory of the season in what proved to be another record-breaking and title winning campaign for the Repsol Honda rider who this year became the youngest ever rider to win four premier class World Championship titles at the age of 24 years 254 days. He will be determined to put on another masterclass at COTA in 2018 to extend his perfect record at the venue but no doubt his great rival and fan favourite, Valentino Rossi – as well as the likes of Maverick Vinales, Andrea Dovizioso, Dani Pedrosa and Jorge Lorenzo  - will do everything in their powers to clinch their first win in Texas and end his winning streak.  One thing is for sure, this race weekend will be simply unmissable.

Don’t miss the chance to witness the fiercest daredevils on two wheels once again push their bikes to the limit Friday through Sunday, April 20th-22nd at America’s premier motorsport venue.

Three-day general admission tickets start at $89, with the price rising to $99 on February 1st. Attendance for the MotoGP™ weekend in Austin has been increasing every year, so guests are encouraged to purchase tickets as soon as possible.

Three days, three incredible views, and one great price. Create your own one-of-a-kind weekend and experience everything COTA has to offer with a Flex Pass, the ticket to all three of the Circuit’s Premium Grandstands. Upon purchase, guests will select which Grandstand they prefer for each individual day. Mix and match to find the perfect combination.

Tickets for a three-day Flex Pass available now for $199: circuitoftheamericas.com/motogp

Live like a MotoGP insider, go behind the scenes and witness the world's premier two-wheel racing series like the pros. Located just steps from the team garages, the paddock buzzes with activity from riders, mechanics, and team personnel as they compete throughout the MotoGP weekend. A Paddock Lane Pass also receives access to the Paddock Lounge, featuring a full bar and food available for purchase, TVs, comfortable seating, and more.

Race admission is not included, standard ticket required to receive entry to the Circuit.

VIP Hospitality Pass For unlimited access each day a paddock suite directly above the team garages, as well as access to the MotoGP paddock, the VIP Hospitality Pass is the right choice. With this pass guests can expect gourmet food options and an open bar all weekend long, in addition to breathtaking views of the start and finish lines, as well as the pre-race ceremony at COTA’s iconic Turn 1. Vip Hospitality holders will get the experience of a lifetime, with a walk through the pit lane on Saturday and Sunday. Plus, a commemorative ticket and lanyard, and one free parking pass in Lot A for every four tickets purchased.

Motorcycle parking in Lot H is included with all ticket purchases, and tent camping is available in Lot N, next to the RV Village. Please visit  www.theCircuit.com or call COTA directly at (512) 655-6300 for more information on purchasing tickets for the biggest, baddest, loudest, and fastest motorcycle race in America!