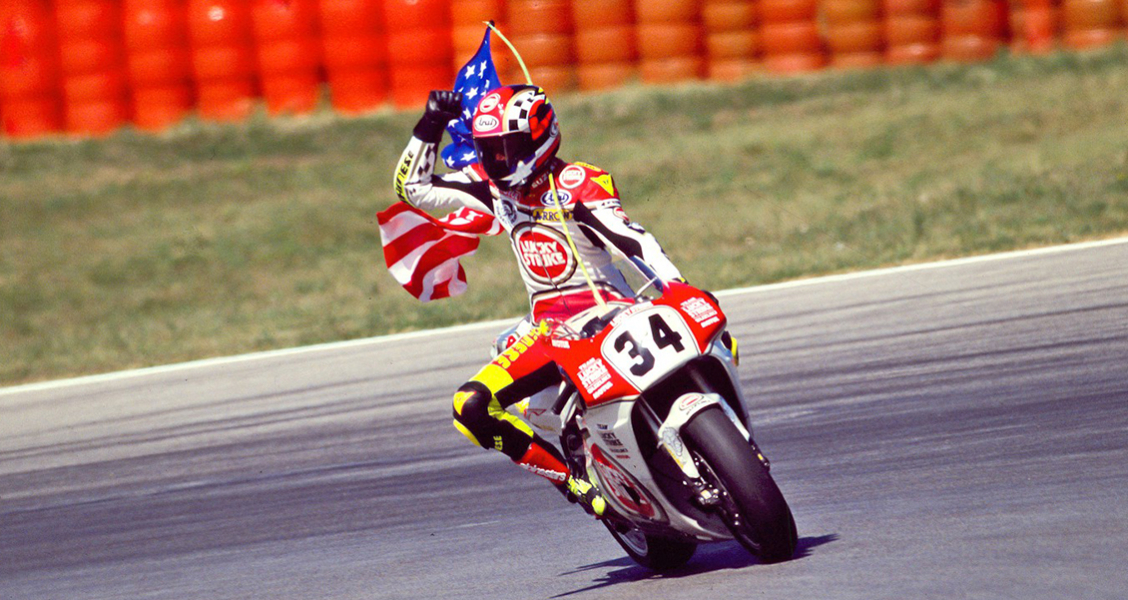 A Brief History of MotoGP in America

The only MotoGP race weekend to take place on U.S. soil in 2017 will be staged for the fifth year in succession at the only purpose-built motorsports facility in the United States: Circuit of The Americas.

As we look forward to the return of the horsepowered rodeo to COTA in April, we take a look back at MotoGP’s long and illustrious association with the United States and how this has led to the Austin circuit becoming the new -  and only – home of MotoGP in America:

MotoGP in America – A Long and Winning History

If you were asked to name which country had produced the most different Grand Prix motorcycle champions, you’d probably say either Italy or Spain. But you’d be wrong; the answer is, in fact, the United States, which can boast no fewer than seven different premier class title winners.

Given the lack of American representation on the current MotoGP grid, you might be surprised to hear there was a time when a US passport was practically a prerequisite to success, with only Australia’s Wayne Gardner interrupting an otherwise-unbroken streak of American champions in the 80s and early 90s.

This trend was first established by Kenny Roberts, who arrived in the world championship in 1978 with two US Dirt Track titles under his belt. Employing the techniques he had learned at home on the loose stuff, ‘King Kenny’ shocked the 500cc establishment – and took three consecutive world titles.

Roberts’ success opened up the floodgates for fellow Americans such as Freddie Spencer, Randy Mamola and Eddie Lawson to take their place on the world stage, and it wasn’t long before the idea of staging a round of the world championship on US soil was revived.

Two Grands Prix were held at the famous Daytona circuit in the mid-60s, but it wouldn’t be until 1988 that the States finally returned to the 500cc calendar, this time at the iconic Laguna Seca track in California.

By then, a new generation of American stars had hit the big-time. Wayne Rainey and Austin’s very own Kevin Schwantz – co-designer of the COTA track - would supply the sport with one of its most electrifying rivalries as the pair, with their wildly contrasting styles, dominated the championship in the early 1990s.

Rainey’s career, however, was cut short by a crash in late 1993 that left him paralyzed from the waist down; Schwantz took the title that year – having been thwarted by his great rival the previous years – but would retire from competition soon after, ending America’s domination of grand prix motorcycling.

Laguna Seca dropped off the calendar after 1994, but when it returned in 2005, America’s latest star Nicky Hayden gave the home fans a new reason to cheer as he took his first MotoGP win. The following year, ‘The Kentucky Kid’ famously beat Valentino Rossi to the title, becoming the seventh US-born Grand Prix champion.

The US gained a second race in 2008 with the inclusion of Indianapolis on the calendar before the arrival of Circuit of The Americas in 2013 made it three American stops on the MotoGP tour. By 2016, COTA was left as the sole home of Grand Prix motorcycling in the US.

So far in its relatively short history, COTA has been the personal fiefdom of Spanish three-time premier class champion Marc Marquez, who has monopolized both pole position and the top step of the podium in all four of the MotoGP races that have so far taken place at the Austin, Texas-based facility.

But with 2016 having thrown up such a varied and unpredictable season, Marquez’s rivals will no doubt be fancying their chances of ousting the King of COTA from his throne when the track hosts its fifth MotoGP event this coming April.

Ticket sales for the 2017 MotoGP Red Bull Grand Prix of The Americas are still ongoing. In addition to the main MotoGP race, COTA will also play host to the Moto2, Moto3 and MotoAmerica support races across the weekend of April 21-23.

Paddock Passes are close to selling out! Now is the time to act and make sure you experience the only MotoGP race taking place on American soil from within the sport’s inner sanctum!

One-day General Admission tickets are available from as low as $39, while three-day tickets to the Horsepower Rodeo start at just $89, with a limited number of Paddock Passes available for purchase to get fans closer to the action behind the teams’ garages.

Fans can expect a jam-packed entertainment schedule on and off the track to celebrate the fifth staging of a MotoGP race in Austin, with family-friendly activities taking place around the Circuit throughout the weekend.

Don’t miss your chance to witness the fiercest daredevils on two wheels push their bikes to the limit!