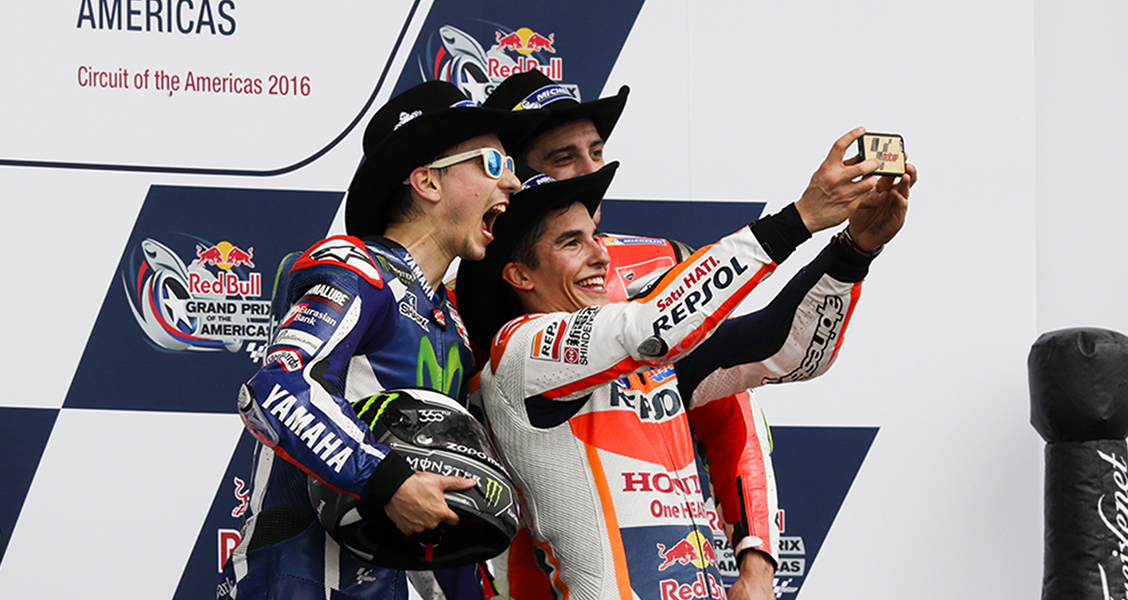 As Circuit of The Americas prepares to host the 2017 MotoGP Red Bull Grand Prix of The Americas this weekend, the promoters of the only MotoGP race week to take place on U.S. soil in 2017 had the chance to speak to some of the biggest stars on the current grid to measure their excitement at returning to race in Austin.

Last year’s exhilarating MotoGP race in Austin saw Repsol Honda’s Marc Márquez - the 2016 MotoGP world champion - secure his fourth successive win from pole at COTA, making it his 10th victory in a row in America. This weekend, he is aiming to add to his haul of titles in the Texan capital as the only purpose-built motorsports facility in the United States celebrates staging its fifth MotoGP race in succession, commenting: “I am very motivated to race in COTA again because it’s one of my favorite circuits and we’ll see if we can fight for the victory once again.”

His memories of racing at the Austin circuit are overwhelmingly positive, stretching all the way back to the inaugural race in 2013: “My best memory in the previous 4 races was in 2013, when I achieved my first win there because it was also my first victory in MotoGP, which made it a very special moment.”

Discussing the specifics of the COTA track, Márquez is clear on what makes it so special to ride on: “I really like the first and second sector because there are a lot of direction changes and it makes it the most technical and physically exigent part.” In addition, he feels that in COTA, MotoGP has found its American home, noting that “COTA is the best circuit in the U.S. right now, it’s very safe and also the weather is good so I believe that it will have a bright future in MotoGP.”

As for Austin itself, the world champion is a big fan of all it has to offer once the racing stops: “There are so many nice places in Austin, I can’t tell you about only one.  But I do enjoy going down to COTA because I really like the atmosphere on the outskirts of the city which feel is very authentically ‘Texas’.”

Márquez isn’t the only rider to be excited at returning to race at COTA this weekend, with Movistar Yamaha’s Italian superstar and MotoGP legend, Valentino Rossi equally thrilled to be coming back to Austin. “I really like Austin. This is a very difficult track and I love riding here,” he says before stating his intention to continue his strong start to the 2017 season by doing all he can to secure his maiden victory at a circuit he has a special affection for: “I have an open account with this track because last year in the warm up I was all set for a strong race but unfortunately I made a mistake. This year I want to try to have a really good race. I also really like the atmosphere of the American circuit and I come to this place always very happily”.

This sense of optimism ahead of the 2017 MotoGP Red Bull Grand Prix of The Americas is also shared by his teammate and current championship leader, Maverick Vinales, who expressed his desire to carry his Moto2 and Suzuki form at the Austin circuit into this weekend, now that he has joined the Movistar Yamaha outfit: “This is a circuit that I really like. I won my first race in Moto2 here and also had one of my best races here with Suzuki. I think it is an excellent circuit for my riding style, I love the ‘up and down’ circuits. Now I’m excited to see how it goes with my Yamaha on this track but I'm sure it will be fantastic as always”.

Another rider eager to put in a big performance in Austin is Ducati’s Jorge Lorenzo, who is keen to put his recent disappointment in Argentina behind him at COTA with his new team: “Finally we come to Austin which has been my aim ever since I crashed in Termas de Rio Hondo” notes the popular Spaniard as he looks ahead to this weekend. “There is no time to complain about what happened in Argentina. Although the results are not in our favour, I think we have found the way to improve, but for one reason or another we have not yet been able to demonstrate this in dry conditions.”

Indeed, he feels that COTA is the ideal venue to get back to winning ways on his Ducati, stating that “Austin is a beautiful circuit, where I have not yet managed to win, but where Ducati, for example, has been on the podium for the past three years. It is a good place to test ourselves, to continue with the evolution of the Desmosedici and to continue adapting my riding style. In the team we are positive, we are all working hard and I am convinced that soon we will change this bad stretch."

Lorenzo’s sentiments are shared by his teammate, Andrea Dovizioso, who also feels that this weekend’s race in Austin provides Ducati with the perfect opportunity to come back after the team’s setback in Argentina: “I was very disappointed after Argentina but now we have to think of the next round in America, at COTA. It’s a fantastic track, one of the best in the championship, and it has really different characteristics to the previous two in Qatar and Argentina.

I really love the race at Austin, there’s a great atmosphere at the circuit and in town and I feel ready to fight things out. I've always done well there and I know that we are competitive: in 2014 and 2015 I managed to get onto the podium, while last year things were going really well until I was hit by Pedrosa. If we want to get our season back on track, then Austin will be a great opportunity to do it. In Qatar we didn’t have any set-up problems, whereas in Argentina we did and struggled all weekend, but I believe in Austin we can be really competitive.”

Ticket sales for the 2017 MotoGP Red Bull Grand Prix of The Americas are still ongoing. In addition to the main MotoGP race, COTA will also play host to the Moto2, Moto3 and MotoAmerica support races across the weekend of April 21-23.

One-day General Admission tickets are still available from as low as $39, while three-day tickets to the Horsepower Rodeo start at just $89.

Fans can expect a jam-packed entertainment schedule on and off the track to celebrate the fifth staging of a MotoGP race in Austin, with family-friendly activities taking place around the Circuit throughout the weekend.

Don’t miss your chance to witness the fiercest daredevils on two wheels push their bikes to the limit!

Please visit circuitoftheamericas.com or call COTA directly at 512.655.6300 for more information on how to purchase tickets for the biggest, baddest, loudest and fastest motorcycle race in America!